But Rice, speaking after talks with her Indian counterpart Pranab Mukherjee, on Saturday suggested administrative procedures on Capitol Hill had delayed the enabling legislation from getting to Bush for him to sign.

She assured reporters it would be signed “soon” and that there were no last-minute substantive differences blocking completion of what admittedly had been, at times, a very “tough” process of negotiations.

“The 123 Agreement is done,” Rice said at a joint press conference with Mukherjee, using the name taken from the numbered paragraph of US law that covers civilian nuclear accords.

“It is a matter of signing that agreement.

“I think you know this has been a busy time for our legislative branch over the last couple of days,” she added, referring to Capitol Hill’s passage of a $700 billion bank bailout plan to address a major financial crisis.

Supporters talk of how the nuclear pact brings two of the world’s largest democracies closer, while opening up the Indian nuclear energy market worth billions of dollars.

But critics say the accord does grave damage to global efforts to contain the spread of nuclear weapons, by letting India import nuclear fuel and technology even though it has tested nuclear weapons and has never signed the Non-Proliferation Treaty (NPT).

The signing snag was the latest in a series of twists and turns that began three years ago when Manmohan Singh, the Indian prime minister, and Bush agreed in principle to the deal.

The Bush administration then pushed hard to get needed approvals for the controversial pact from the 45-nation Nuclear Suppliers Group, the International Atomic Energy Agency (IAEA) and the US congress.

The deal endured a rocky road in India as well. The communists withdrew their support from the Singh government in July over the pact, condemning it as India’s “surrender” to Washington.

Mukherjee, seated by Rice at the press conference on Saturday, said he hoped the nuclear deal would be signed shortly.

But he was non-committal when asked what he thought of a promise Rice had made to US congressmen to push the Nuclear Suppliers Group to prohibit the transfer of enrichment and reprocessing technology – which can be used to make weapons – to states that haven’t signed the Non-Proliferation Treaty – like India.

“In respect of the facilities for reprocessing, as and when we will enter into bilateral arrangements, these issues will be addressed,” Mukherjee said.

Rice said the experience of working on the deal had left ties with New Delhi “one of the very strongest” relationships that the Bush administration would leave for its successor. 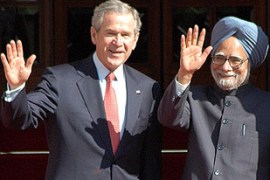 The US senate overturns 30-year ban on civilian nuclear trade with New Delhi.