In an attempt to ease pressure on the Nikkei, the Bank of Japan injected 800 billion yen ($7.6bn) into the market, the 13th straight business day it has done so.

Seoul and Shanghai were shut for public holidays. Taipei recovered from earlier losses to post a 0.7 per cent gain.

Dealers took their cue from Wall Street, where the Dow Jones Industrial Average sank 3.22 per cent to a three-year low on Thursday.

Against this backdrop of market volatility, world financial leaders cautioned that the rescue plan may not be enough to revive the global economy.

“In America … as in Europe and the rest of the world, we have to face up to the major correction that is under way” on financial markets, he told a French radio station on Friday.

“So we cannot say that after such and such an action, it is all over.”

Trichet declined to label France and the eurozone’s economic slowdown a recession, despite forecasts to that effect.

“ECB experts tell us that we have slowing growth,” he said.

“I will not use any word other than that – slowing growth with significant risks that growth may become even weaker.”

But Trichet stressed that the US rescue bill must be passed.

Earlier Nicolas Sarkozy, the French president, announced that he is to hold a European financial summit to discuss the global crisis in Paris on Saturday.

US House Democratic leaders are optimistic that the revised bill will clear the House of Representatives.

George Bush, the US president launched an impassioned appeal to the House to approve the package, saying that “people’s jobs are in jeopardy”.

In his 14th appeal in a fortnight for congress members to back the proposal, Bush said: “This issue has gone way beyond New York and Wall Street. This is an issue that is affecting hard-working people.”

Despite Bush’s appeal, investors worry that recent data, yet to capture the full shock to the labour market and consumer confidence from September’s series of bank failures and troubles, is already showing the economy is nearing recession.

Investors also chose to stay on the sidelines in advance of a closely watched US jobs report due later.

Aly-Khan Satchu, a market analyst, told Al Jazeera that the current crisis marked a new era in the global economy.

The borrowed money was like the oxygen. Now the oxygen is out of the system we are seeing a gradual process of asphyxiation. I think the amount [of the bailout] is a drop in the ocean.

“The Dow has fallen precipitously in the last ten days and I think the market is going to call the bluff of the US at this time.” 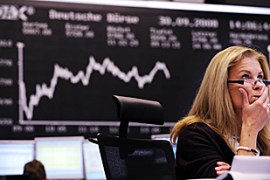 Europe markets stable after US vote

Stocks climb on hopes of US bailout

European and Asian indices regain some ground in advance of US senate vote on revised rescue plan.