Nielsen said the Palin-Biden debate was shown live on 12 networks broadcast in the US, including ABC, CBS, FOX, NBC and CNN.

Snap opinion polls on Thursday suggested Biden won the debate. CNN’s sampling said he took the clash by 51 to 36 per cent while a CBS survey of uncommitted voters scored it 46 to 21 in favor of Biden.

Early exchanges between Biden and Palin were dominated by the recent global turmoil on the financial markets.

Biden attacked John McCain, the Republican presidential candidate, accusing him of being “out of touch” when he described the US economy as fundamentally strong.

Palin described herself as being part of a “team of mavericks” led by McCain who would bring change to the White House.

Many critics had expected Palin to fumble the debate, after she faced ridicule over a series of interviews.

However Rob Reynolds, Al Jazeera’s senior Washington correspondent, said Palin did not put in a poor performance and did not make any major mistakes.

Biden and Palin also clashed on tax policies with both claiming that they would cut tax, and energy, with Palin calling for more drilling to utilise US energy resources.

Palin later accused Biden of raising “the white of flag of surrender” in Iraq over the Democrat policy of withdrawing US forces from the country.

Biden said the Republicans were not offering a plan to end the conflict, triggered by the US-led invasion of Iraq in March 2003, in which tens of thousands of Iraqis and more than 4,000 US troops have been killed.

“I didn’t hear a plan,” Biden responded. “Barack Obama offered a clear plan. Ship responsibility to Iraqis over the next 16 months. Draw down our combat troops.”

Biden also lashed out at Dick Cheney, the current vice-president, calling him “the most dangerous vice-president in American history”.

Thursday’s debate came after a poll found that most US voters have huge doubts about Palin’s experience and her ability to lead.

“Six in 10 voters see her as lacking the experience to be an effective president, and a third are now less likely to vote for McCain because of her,” the Washington Post said of its joint poll with ABC News.

And McCain’s campaign, which has stalled in the wake of the global financial crisis, said on Thursday that he had conceded the battleground state of Michigan in order to focus on states where he has a better chance of beating Barack Obama, the Democratic presidential candidate.

“It’s been the worst state of all the states that are in play and it’s an obvious one from my perspective to come off the list,” said Greg Strimple, a senior McCain adviser.

Concerns over Palin’s experience have increased since she gave a series of interviews on foreign policy, the economy and the US supreme court.

She has faced ridicule for some of her answers, including citing Alaska’s proximity to Canada and Russia as valid foreign policy experience. 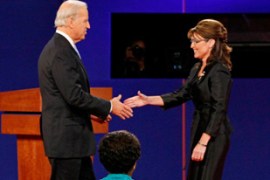 US vice presidential candidates clash on Iraq, the economy and energy issues. 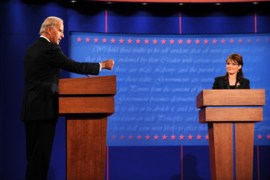 Video: Palin and Biden face off

Candidates for US vice-presidency hold their only head-to-head debate in St. Louis. 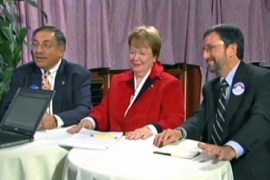