“We cannot spend another night in this chilly weather, especially the kids.”

According to an AFP correspondent in Wam, one of the worst-hit villages, emergency tents had not arrived by Thursday morning, and villagers had been forced to sleep in the ruined shells of their homes overnight.

They had spent the previous day in a desperate search for loved ones or burying the dead in mass graves.

Al Jazeera’s Imran Khan, reporting from the Pakistani city of Quetta, said: “This is is a city gripped by fear and perhaps its citizens have a very right to be [afraid].

The last earthquake here was in 1935, and it killed 30,000 people. It is commemorated in Baluchi folklore and memorials.

“This latest earthquake has triggered fears of a mssa devasation and some residents of the city have deiciced that it is safer despite the bitter cold to sleep outisde than [it is] to sleep inside.”

Meanwhile, the Pakistan Meteorological Department said it had recorded more  than 250 aftershocks.

They also said that more are likely to be felt into next week but  of decreasing magnitude.

“It is a complete emergency here. Nobody has anything to eat and drink,” Dilawar Kakar, the mayor of Ziarat, said.

“We need a lot of resources to reconstruct, and stabilise these trauma stricken people.”

The UN World Food Programme pledged to supply emergency rations to those displaced by the disaster for two months, while the International Committee of the Red Cross was distributing some 2,500 tents.

In the hillside town of Kawas, soldiers handed out blankets, tents and sleeping bags to a crowd of 500 people and helped load two dozen trucks with supplies destined for other areas.

In the capital Islamabad, Farooq Ahmad Khan, chairman of the National Disaster Management Authority, said Pakistan had not issued an appeal for foreign assistance, but any help would be accepted. 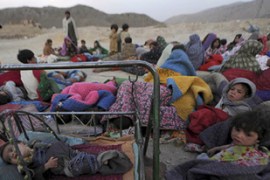 Thousands shelterless as agencies struggle to get aid and tents to worst affected areas.