Gordon Duguid, a US state department spokesman, said on Thursday that the US encouraged China to “examine policies that have created tensions due to their effect on Tibetan culture, religion and livelihoods”.

Washington also wants China to provide better access to Tibetan areas for journalists, diplomats and other international observers, he added.

China launched a crackdown in Tibet in March following what it said were violent protests, against Beijing’s rule.

Duguid said the two parties needed “serious, substantive dialogue” if they were “genuinely committed” to dealing with the thorny issue.

“We and others around the world will continue to look to these talks to result in concrete progress.”

Duguid was explaining the US position over a meeting the Dalai Lama has called for with exiled Tibetans next month amid pressure for the 73-year-old leader to take a harder line with Beijing.

Some 300 delegates representing the worldwide exiled Tibetan community will converge in Dharamshala, India, the seat of the Tibetan government in exile, to discuss the future of the Dalai Lama’s “middle path” policy with China.

Last weekend the Dalai Lama said that he had “faith and trust” in the Chinese people but not the government.

The Dalai Lama fled into exile in India in 1959 following a failed uprising in Tibet against Chinese rule. 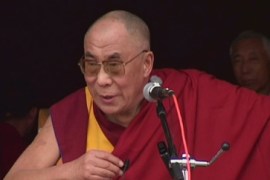 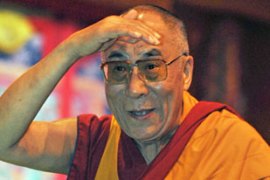 Dalai Lama joins demonstration from his hospital bed in Mumbai. 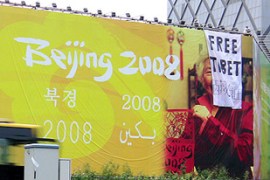