In his essay, titled “Was Japan an Aggressor Nation?”, Tamogami said that calling Japan “an aggressor nation” during the Second World War was “certainly a false accusation”.

“The current Chinese government obstinately insists that there was a ‘Japanese invasion’, but Japan obtained its interests in the Chinese mainland legally under international law through the Sino-Japanese War, the Russo-Japanese War, and so on, and it placed its troops there based on treaties in order to protect those interests,”  Tamogami wrote.

He also claimed life under Japanese occupation was “very moderate” and cited a rise in the population on the Korean peninsula during Japan’s 1910-1945 occupation as “proof that Korea under Japanese rule was also prosperous and safe”.

Tamogami also claimed that Japan was tricked into attacking Pearl Harbor on December 7, 1941, by Franklin Roosevelt, the then US president.

Japan was “snared in a trap that was very carefully laid by the US in order to draw Japan into a war”, he wrote.

“Roosevelt had become president on his public pledge not to go to war, so in order to start a war between the United States and Japan, it had to appear that Japan took the first shot. Japan was caught in Roosevelt’s trap and carried out the attack on Pearl Harbor.”

Tamogami ended his essay saying Japan should reclaim its glorious history and warning that a country that denies its own history is destined to fall.

Tamogami was not available for comment on Friday and a defence ministry spokesman said the former air force chief had not released a statement.

Disputes over Japan’s wartime history often fray ties with Beijing and Seoul, although relations with China especially have warmed in the past two years as both sides seek to put priority on deepening trade and investment.

Although some scholars and politicians in Japan hold views similar to those expressed in Tamogami’s essay, successive Japanese governments, including the current administration, have expressed remorse for the country’s war-time actions.

In 1995, Japan officially appologised for its conduct during the war, following that up with another apology a decade later. 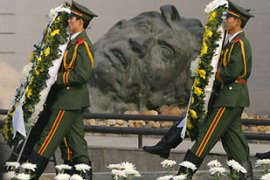 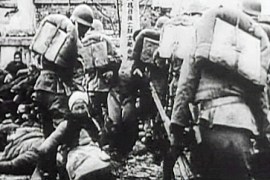 We investigate a documentary that denies Japanese atrocities in China during WWII.