“The two are currently under the protection of the Malian army and are en route to Bamako [the capital] where they will be transferred to the care of the Austrian team.”

According to the Mali source, the two were “in good health” considering they had been held for eight months.

“I’ve already spoken personally to their families in Salzburg and informed them of this happy turn of events. Along with the families, I’m happy these long weeks of worry and uncertainty are now at an end,” Plassnik said.

Ebner, 51, and his companion Kloiber, 44, went missing in Tunisia on February 22, with al-Qaeda in the Islamic Magreb claiming responsibility for their abduction on March 10.

The kidnappers initially demanded the release of a number of members imprisoned in Algeria and Tunisia.

They subsequently demanded $6.4m according to unconfirmed press reports.

Vienna, which was being helped by Bamako in its negotiations with intermediaries to obtain their release, has consistently refused to comment on the kidnappers’ demands or ultimatums.

“It’s now a matter of organising their rapid and safe return to Austria,” Plassnik said.

An Austrian aircraft would be sent to Bamako in the next few hours to bring the two home. 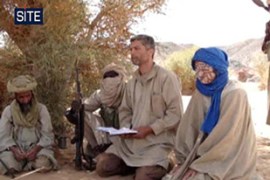