“We have ordered the search of several houses, apartments and cars and have intensified co-operation with police in Serbia and Bosnia,” Borovec said.

He declined to give more details or comment on media reports that two Serbian citizens were among those arrested.

Vladimir Faber, the national police chief, was due to meet Milorad Veljovic, his Serbian counterpart later on Thursday, as Zagreb and Belgrade stepped up efforts to crack down on organised crime.

Zagreb pledged to stamp out organised crime after several unresolved violent incidents in Croatia, which have raised concerns amid plans to conclude European Union accession talks next year.

On Wednesday, it set up special courts and pledged to improve witness protection programmes and rebuild its police force.

Dealing with organised crime and corruption is one of the main conditions Zagreb must meet to join the EU.

In other violent incidents, the daughter of a prominent lawyer was shot dead in Zagreb earlier this month.

Ivo Sanader, the prime minister, appointed new justice and interior ministers and a new police chief after that killing. 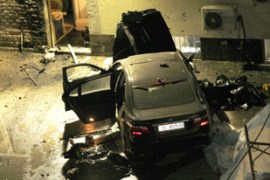 Deaths occur as a car bomb explodes outside office of weekly newspaper.