About 200 Muslim women in headscarves rallied in front of the parliament building in support of the bill.

On Wednesday hundreds of supporters of the new law marched through the capital, Jakarta, urging politicians to enact the bill.

They have been angered by what they say are increasingly racy television ads and films, as well as the growing availability of magazines such as Playboy.

“I don’t want my children to go to hell because we allow pornography,” one demonstrator named Siti told The Associated Press.

Indonesia is the world’s most populous Muslim nation, with some 90 per cent of the population professing to follow the faith.

But critics of the bill say the anti-pornography legislation could be misused against Indonesia’s minority Christian and Hindu communities and threatens the country’s pluralistic culture.

“There is a risk that a moral police will stand up who will use the vague definition of pornography to take action against minority groups, artists and others,” MP Eva Sundari told Al Jazeera.

“This is against Indonesia’s diversity defended by our constitution.”

Officially, art and culture are exempt from the bill, but people in Papua, Bali and other Indonesian islands with large non-Muslim populations worry that the new law is too vague and could be misused.

They also fear it could scare away tourists.

Al Jazeera’s Jakarta correspondent, Step Vaessen, says opponents of the new law are also worried it could put safety at risk because the bill gives civilian groups the right to take action against what they consider obscene behaviour.

In several recent instances civilian groups like the Islamic Defenders Front have used violence against those they say offend Islam. 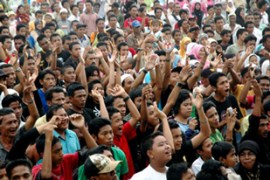 An anti-pornography bill being considered by the parliament is challenged in court.

Tens of thousands of conservative Muslims rallied in the Indonesian capital on Sunday in support of a proposed anti-pornography bill that critics say would chip away at the country’s secular traditions.