“Two of our troops were slightly wounded, and I heard three soldiers on the Cambodian side were wounded. The situation has returned to normal now.”

Cambodian officials said one of their soldiers was hurt.

“There was a clash but we don’t know how many Thai soldiers got injured. On the Cambodian side, one soldier was injured in his left hand,” said Hang Soth, director-general of the Preah Vihear authority, the body tasked with the conservation of the ancient Khmer-era site.

The incident comes as both countries attempt to resolve the decades-long border dispute.

Somchai Wongsawat, the Thai prime minister, is scheduled to visit Cambodia on October 13 to meet Hun Sen, his Cambodian counterpart.

The current conflict focuses on an area of scrubland surrounding the 11th-century temple which was recently awarded World Heritage listing by Unesco, the UN cultural organisation.

According to a Cambodian border police official, Thai troops had initially entered the area but were stopped and turned back by Cambodian soldiers.

They then opened fire with M-79 rockets and M-16 assault rifles after re-entering the territory.

The official also said that Cambodian troops responded by shooting a single B-40 rocket and  then opening fire with their AK-47 rifles.

A Cambodian official said a letter of complaint was being drafted to be sent to the Thai government.

Much of the border remains in dispute, and the slow pace of clearing old landmines from the area has delayed its demarcation.

Tensions erupted in July after the World Heritage listing, angering nationalists in Thailand who still claim ownership of the site.

Those tensions turned into a military standoff, in which up to 1,000 Cambodian and Thai troops faced off for six weeks.

Both sides agreed to pull back in mid-August, leaving 20 troops from each side stationed at a small pagoda in the border area, while 40 Cambodian and Thai solders remain nearby.

Talks to resolve the dispute were postponed amid political turmoil in Thailand, as well as both countries continuously swapping accusations of violating each other’s territory. 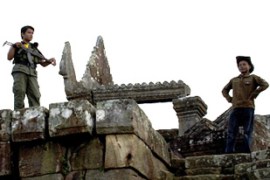 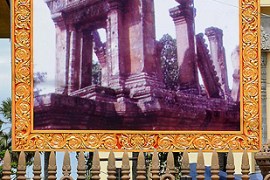