The government agreed with the International Monetary Fund (IMF) last week on a loan of $2.1bn but Haarde had said the country would need about four billion dollars more.

Iceland is hoping for “a round figure in terms of four billion dollars of loans over four to five years,” he said.

The country has so far approached the central banks in Denmark, Finland, Norway and Sweden, as well as the ECB and the Federal Reserve.

The Faroe Islands, an autonomous Danish province, has also offered Iceland a loan to help it through the financial crisis, the Faroese government said Tuesday.

The loan, worth $50.7m, would be paid from the accounts of the Faroe Islands’central bank, Faeroerske Landsbank.

“There are very special ties between the Faroe Islands and Iceland, and that’s why we have offered this country a loan of 300 million krona,” Kaj Leo, the head of local government, told Faroese radio.

“My impression is that Iceland is both grateful and ready to take our outstretched hand,” he said.

Iceland is also negotiating a loan from Russia, in addition to IMF aid.

One condition set by the IMF was that Iceland should raise its key interest rate to 18 per cent before the IMF board meets this week.

As a result, the Icelandic Central Bank on Tuesday raised the rate by 6.0 points to 18 per cent, the highest level in Europe.

The bank said the collapse of the country’s three biggest banks and “the harsh external measures that followed” had “paralysed” Iceland’s foreign exchange market.

“Although the situation has eased somewhat, some restrictions continue to be inevitable,” it said.

The rate increase came as official statistics showed Iceland’s 12-month inflation rate rose to a record high point of 15.9 per cent in October from 14.0 per cent a month earlier.

Another IMF condition was to stabilise the krona, which has lost about 40 per cent of its value since the beginning of the year.

Imports to the North Atlantic island have become more costly as a result of the currency’s devaluation.

The combination of high inflation and a falling currency means Iceland’s 320,000 inhabitants risk not having access to consumable goods, which are largely imported. 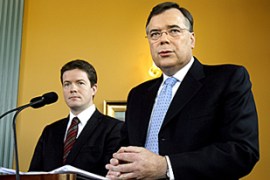 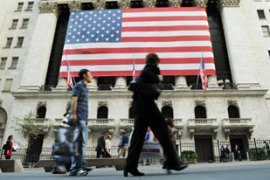 Investors fear bids to save financial institutions may not be enough for world economy.

Kaupthing falls under government control days after two of its national rivals.