“Today the embargo has been broken. It is a message to the people of Gaza that we have not been abandoned,” he said.

Gaza’s 1.5 million Palestinians have been suffering the effects of a crippling Israeli blockade since the Hamas movement took full control of the territory after pushing out security forces loyal to Mahmoud Abbas, the Palestinian president, in June 2007.

Since then there have been shortages of basic necessities such as food, fuel and medicines as Israel has strictly controlled all deliveries.

Last week, the International Committee of the Red Cross said that virtually no medical supplies were reaching the Gaza Strip, putting the lives of several hundred patients at risk.

“We got a list of zero stock medicines in Gaza, like baby formula, paracetamol, anti-histamine tablets,” Ibrahim Hamami, a Palestinian-Briton and family physician from Buckinghamshire, said.

“There are basic things we can get over the counter in Europe but they do not have a single pill.”

The trip was the second by the US-based group after two smaller fishing boats made the journey in August.

Organisers have said that they hope to make the trips into a monthly exercise in order to provide regular relief to the Gazans.

“We would like to do this once a month, but you need money to start a ferry service to Gaza,” Derek Graham, the protest organiser, said.

Israel had warned the activists ahead of both journeys not to enter the closed military zone it maintains around the Gaza Strip but did not interfere with either voyage.

Yigal Palmor, Israeli foreign ministry spokesman, said: “In the end it was decided at a high level on Tuesday night to permit the boat to arrive.”

Israel pulled its troops and settlers from Gaza in 2005 but still patrols the waters off the territory. 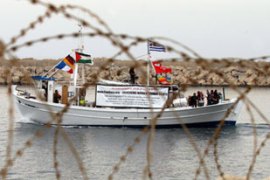 Official says ‘all options’ being considered to stop them from breaking Gaza siege. 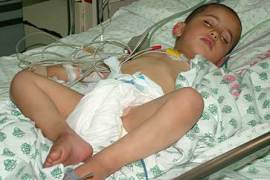