The nine men had been seized with two Sudanese drivers near the disputed oil region of Abyei on October 19.

The Chinese team had been working for the China National Petroleum Corporation (CNPC) at the time of their capture.

The oilfield is run by the Greater Nile Petroleum Operating Company (GNPOC), a consortium of four oil companies from China, India, Malaysia and Sudan.

One of the Sudanese drivers escaped shortly after the abduction.

An unidentified diplomatic source said shortly after the attack that members of the Arab Messeria tribe had carried out the abduction in an attempt to win a greater share of the region’s oil revenue.

But al-Sadiq said the kidnappers were local residents of Kordofan who took directives from a rebel group called the Justice and Equality Movement from the adjacent, war-torn region of Darfur.

But Ahmed Hussein, a spokesman for the group, told The Associated Press that his group had “nothing to do with this incident”.

“This is just a way for the Sudanese government … to distract eyes from the real issue of the crisis in the country and the criminal trial of [President Omar] al-Bashir,” Hussein said.

Al-Bashir was charged in July by the prosecutor of the International Criminal Court with conducting a genocide campaign in Darfur.

The court has still to decide whether to issue an arrest warrant.

The abduction of the Chinese men is the third such incident over the past year in the region, the source of a large part of Sudan’s oil wealth. 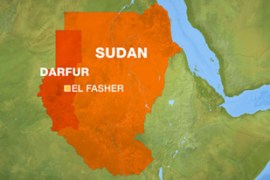