The index has lost more than 20 per cent since last Monday and nearly 40 per cent in the last month alone.

The broader Topix index of Japanese shares posted an even steeper fall of 7.4 per cent.

In Europe, markets followed the Asian lead, initially plunging but had pulled back most of their losses by the close.

Patrick O’Hare at Briefing.com, which provides live market analysis, said: “It is fear that is driving the market and the prevailing fear now is that 2009 earnings estimates will need to be marked down considerably as global economies retrench.

“Another fear the market can’t shake is the fear of forced selling by troubled hedge funds.”

The closing numbers in Asia capped a volatile day, with the Nikkei at one point on Monday morning trading up three per cent, before plunging once again.

Elsewhere in Asia markets in Hong Kong, Australia and the Philippines also slid dramatically, with the Manila stock exchange at one point suspending trading for 15 minutes as circuit-breakers cut in when the market lost more than 10 per cent.

Philippine shares eventually ended the day down by 12.3 per cent, its lowest close since September 2004.

“This is the loss of confidence in the market,” Emmanuel Soller, broker at EquitiWorld Securities Inc in Manila, told the Associated Press.

“Our fundamentals were ignored, we followed the US. But I believe there was an overreaction by investors.”

In Hong Kong the Hang Seng index was down more than 12 per cent in late afternoon trade as investors continued to desert the market.

In South Korea meanwhile stocks went on a rollercoaster ride as the Bank of Korea announced it was cutting its key interest rate by three-quarters of a per cent, its biggest-ever rate cut.

That gave the market a brief shot in the arm, rising for the first time in a week and at one point trading up 2.9 per cent.

But investor nerves kept the market in flux and at one point the benchmark Kospi index was down by as much as five per cent.

At the close of trade, shares had managed to regain some ground, with the Kospi up 0.8 per cent. 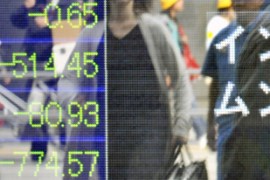 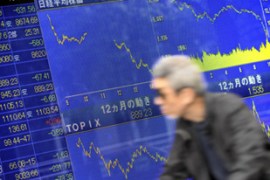 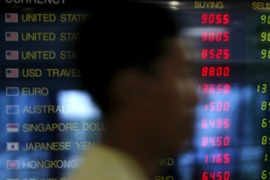 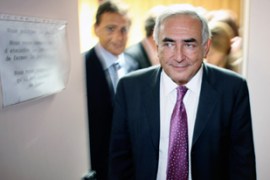