The US has not officially responded to Syria’s accusations, but an unnamed US official said on Monday that Abu Ghadiya, a former lieutenant to Abu Musab al-Zarqawi, the late leader of al-Qaeda in Iraq, had been killed in the raid.

Muallem also said that Syria would be holding the US responsible and that the government needed to investigate and report back to them with an explanation as to why the raid had been carried out.

“Also, the question arises here: Is this the production of the agreement between the administration and Iraq, the defensive agreement, where many Iraqis are saying that the sovereignty of Iraq is at stake and the American will use the Iraqi’s territories to launch aggression against neighbouring countries? These are question marks,” he said.

The families of those killed in the raid on Sukariya, which lies close to the town of Abu Kamal, buried their loved ones on Monday.

Syrian state television said four US military helicopters had been involved in Sunday’s raid on the village.

Two of the helicopters landed and dropped off eight US soldiers, who then entered a house, Syrian media reported.

The government said that those killed were workers.

Akram Hameed, a man in his 40s who said he was injured in the attack while fishing in the Euphrates river, told Syrian television he saw four helicopters coming from the border area under a heavy blanket of fire.

“One of the helicopters landed in an agricultural area and eight members disembarked,” Hameed said.

“The firing lasted about 15 minutes and when I tried to leave the area on my motorcycle, I was hit by a bullet in the right arm about 20 metres away.”

Syrian television showed what it said was the injured wife of the building’s guard, in bed in hospital with a tube in her nose, saying that two helicopters landed and two remained in the air during the attack.

The raid targeted an area used by fighters responsible for cross-border attacks into Iraq, Ali al-Dabbagh, the Iraqi government spokesman, said on Monday.

“The attacked area was the scene of activities of terrorist groups operating from Syria against Iraq,” he told the Reuters news agency.

“The latest of these groups … killed 13 police recruits in an [Iraqi] border village. Iraq had asked Syria to hand over this group which uses Syria as a base for its terrorist activities.”

Al-Dabbagh would not say who had carried out the attack.

“Iraq is always seeking distinguished relations with its sister Syria,” he said.

“The presence of some anti-Iraq groups in Syria, which are supporting and participating in activities against Iraqis, would hinder improvement of these relations”.

The US and the US-backed Iraqi government have on several occasions accused Damascus of not doing enough to stop anti-US fighters, including those from al-Qaeda, crossing the border into Iraq.

After news of Sunday’s attack emerged, the Syrian government summoned the senior US and Iraqi envoys to Damascus to protest against the raid, the Syrian Arab news agency (Sana) reported.

The statement also called for the Iraqi government to launch an investigation into the attack.

Reem Haddad, the Syrian information ministry spokesperson, sais that the raid breached a recent accord between Iraq and the US.

“This is a flagrant violation of the new [security] agreement between Iraq and the US,” she told Al Jazeera.

“One of the points of that agreement is that they do not attack bordering countries.”

Hoda Abdel Hamid, Al Jazeera’s correspondent in the northern Iraqi city of Irbil, said the alleged US raid seemed to be in contradiction to comments by US officials that Syria had improved its border security.

“What is quite puzzling for many people here is that the Americans had actually praised the role of Syria over the last year,” she said.

“Earlier this year, I had conversations with General David Petraeus [then commander of US forces in Iraq] and Ryan Crocker, the US ambassador to Iraq; they both said that Damascus had made [security] efforts at its main airport and along the Syria-Iraq border, and that the flow of fighters coming into Iraq had diminished considerably over the previous year.

“They both said the number of people infiltrating Iraq from Syria had dropped by 50 per cent [in the last year]. Actually, Petraeus told me that it was impossible for any country to fully control its borders, specifically when it is in a porous desert area.”

Lieutenant-Colonel Chris Hughes, a spokesman for US forces in western Iraq, said that the US division that operates on the Iraqi side of the border was not involved in Sunday’s incident.

The area targeted lies close to the Iraqi border city of Qaim, which in the past has been a crossing point for fighters, weapons and money used to fuel the armed Sunni opposition against Iraq’s government. 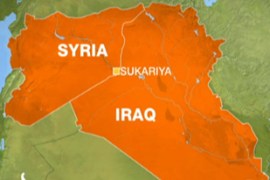 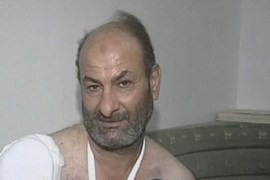