“This is the beginning of the process. We are trying to engage those who are fighting inside Somali because what we are fighting for is the withdrawal of Ethiopian troops.”

The accord calls for a ceasefire – which was first signed in June – to finally come into force on November 5, Susannah Price, spokeswoman for the UN envoy to Somalia, said.

The deal also calls for Ethiopian troops to pull out of areas in Mogadishu and the central town of Beledweyne by November 21, leaving them under the control of African Union troops in Somalia.

The agreement also states that “the second phase of the troop withdrawal shall be completed within 120 days”.

Ethiopia’s foreign ministry vowed to comply with the UN-sponsored deal.

“We will respect this encouraging decision reached by the transitional government of Somalia and the ARS,” Wahide Belay, a foreign ministry spokesman, was reported by the AFP news agency as saying on Monday.

“The agreement is in line with the Ethiopian position on orderly troop withdrawal,” he said.

But critics point out that not all the factions fighting in Somalia have signed up to the agreement, and previous ceasefire agreements have suffered serious setbacks.

Some within the opposition have already rejected the deal, saying it would have no effect on the ground.

“The agreement reached in Djibouti on Sunday is an illusion to deceive the Somalis,” Sheikh Hassan Dahir Aweys, leader of a breakaway faction of the Alliance for the Reliberation of Somalia, said .

“Neither the international community nor Ethiopia itself announced the complete withdrawal of Ethiopian troops.”

Despite the deal, it remained unclear when exactly the last Ethiopian troops would leave Somalian territory.

Heavy fighting has continued in Somalia between government forces and anti-government fighters.

More then 10,000 people have been killed and one million displaced in fighting since early last year alone.

Government troops recaptured the three towns of Bardale, Wajid and Hudur in southern Somalia near Baidoa, the seat of Somalia’s parliament over the weekend.

An African Union (AU) peacekeeping force will be responsible for security in the areas vacated by Ethiopian forces, with the help of Somali government troops and opposition security forces, until the deployment of UN forces, the deal said.

Somalia has been without an effective central government since 1991 and the transitional government is the 14th attempt to establish one. 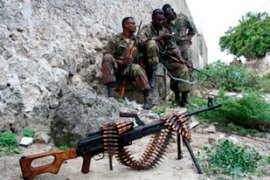 UN says deal between government and opposition would see Ethiopians leave in 2009.