“The death toll has gone up to 16 as six more bodies have been recovered from the site. Senior Taliban commander Haji Omar died in the strike,” Khan said.

The Associated Press news agency quoted Pakistani intelligence officials as saying that up to 20 people were killed.

The Pakistani Taliban later confirmed in a communication to Al Jazeera that one of its important leaders was killed in a US air strike in South Waziristan, Al Jazeera’s correspondent in Islamabad said.

South Waziristan is considered a possible hiding place for Osama bin Laden, the al-Qaeda chief, and his deputy Ayman al-Zawahiri.

The officials, citing reports from agents and informers in the area, said fighters cordoned off the scene and the identity of the victims was not immediately clear.

In a separate incident on Monday, Pakistani police said a car bomb exploded in the western city of Quetta and killed two people.

The bomb exploded on Monday in a parking lot near government offices and the Iranian consulate, a senior police officer said.

He said a rickshaw driver and another person died while 10 others were injured.

In recent fighting, at least 15 people were killed in clashes between suspected pro-Taliban fighters and members of an armed tribal group in northwest Pakistan on Sunday, according to officials.

Up to 80 members of the so-called tribal Lashkar, a group raised to tackle fighters loyal to the Taliban and al-Qaeda, were also abducted amid the fighting, which took place in the Matt area of Swat valley on Sunday, sources told Al Jazeera.

Three local commanders were killed in the clashes, while 12 tribal leaders were hanged, they said.

Fighting broke out when supporters of Maulana Fazlullah, a local religious leader with links with to the Pakistani Taliban, tried to abduct Pir Samiullah, leader of the Lashkar in Matta, a military official said on condition of anonymity.

“Scores of Taliban raided Mandal Daag village in the Matta district of the valley to abduct Pir Samiullah,” the official told the AFP news agency.

Samiullah, who leads a 500-strong armed group of local people, and his supporters have demanded that the Taliban leave Swat.

Target in North Waziristan said to be the stronghold of a veteran Taliban commander. 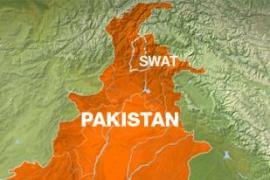 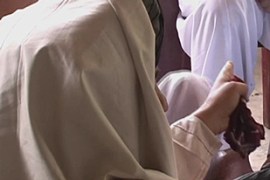