“Now that we have signed the agreement, we can start negotiations to agree on positions in ministries and parliament,” Kubilius said.

He also said that Homeland Union wanted to control the defence, economy, finance and foreign ministries.

The party won 44 seats in the country’s parliamentary election, which was split into a party list vote two weeks ago and a runoff in single-mandate districts on Sunday.

The other coalition parties, the National Revival party, the Liberal movement and the Liberal and Centrist Union, won 35 seats combined, giving the centre-right bloc 79 votes in the 141-member legislature.

The governing Social Democrats finished in second place with 26 seats, losing their hold on power in the former Soviet republic, which regained independence 17 years ago and joined the EU and Nato in 2004.

Valdas Adamkus, the president, said he expected the coalition could start making changes that had been delayed for years and were needed for the largely Catholic country of 3.4 million people. 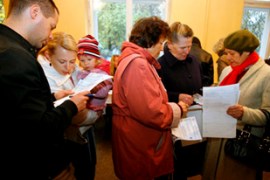 Conservative opposition party likely to build on narrow lead in final round of voting.