But McCain was also forced to defend Sarah Palin, his running mate, after Politico, a US political website, reported that she had fallen out with campaign aides.

“They are saying that she doesn’t agree with the advice they [the aides] are giving her,” Al Jazeera’s Cath Turner, reporting from Washington, said.

“She feels her image is being tarnished by the way that they have rolled out and also restricted her media accesibility.

“This is not a good sign for Palin. This is not what the McCain camp wants to be destracted by in the last week of the campaign.

“Any disruption or tension in their camp will not help their cause.”

McCain strongly defended Palin, who has been blamed for falling poll numbers, saying she had “more executive experience than Senator Biden [the Democrat vice-presidential candidate] and Senator Obama together.

“She’s a role model for millions and millions of Americans,” he said “She’s just what Washington needs.”

The Democrat campaign has repeatedly characterised McCain as a replica of George Bush, citing the Arizona senator’s record of voting with the president 90 per cent of the time.

McCain again tried to counter these accusations on Sunday, saying he had frequently opposed Bush’s administration on Iraq, spending and climate change.

“Do we share a common philosophy of the Republican Party? Of course, but I’ve stood up against my party and I’ve got the scars to prove it.

“I could go down a list of issues with you.”

The two presidential candidates are focusing on swing states in the run-in to the polls on November 4.

Obama spoke to 75,000 people in Denver, Colorado, on Sunday, a state won by George Bush, the incumbent president, in 2004 and considered tight enough to be won by either candidate and help clinch the presidency.

Responding to McCain’s television appearance Obama said: “We know what the Bush-McCain philosophy looks like.

“It’s a philosophy that gives tax breaks to wealthy CEOs and to corporations that ship jobs overseas while hundreds of thousands of jobs are disappearing here at home.

“It’s a philosophy that justifies spending $10bn a month in Iraq while the Iraqi government sits on a huge surplus and our economy is in crisis.

“We can’t have another four years that look like the last eight, it is time for change in Washington.”

Ryan Grim, a congressional reporter for Politico, told Al Jazeera that McCain would have a “serious problem” creating an impact before November 4 after the apparet failure of moves such as suspending his campaign to focus on the economic crisis and choosing Palin as running mate.

He said any major moves by the Republican candidate in the final week could be seen by voters as “just one more stunt”.

Grim also said that in recent elections a small number of voters have chosen to back the candidate they suspect will be succesful, a situation which could help Obama.

“That could be two or three points which could take a five or six point lead into an eight or nine point landslide.” 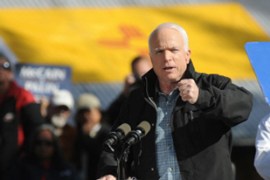 US rivals campaign in vital states 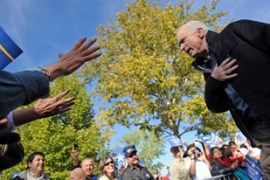 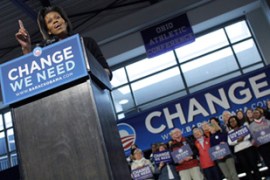 Arizona senator blasts Barack Obama on the economy as US election campaign continues.