Appearing alongside Livni, Peres said that the Kadima party leader had recommended an election to be held as soon as possible.

Jacky Rowland, Al Jazeera’s correspondent in Jerusalem, said: “The meeting that she had with Peres was just formaility and protocol … she came to Peres’s presidential residence to tell him that she had been unable to find enough seats to form a coalition.

“Peres will now hold consultations with the leaders of various parties represented in the Knesset, to see if there is anyone else who can cobble together a coalition.

“But it is believed that if Livni cannnot do it, there is no other figure who would be able to command the number of seats required.”

Livni had earlier been quoted by Israel’s Yedioth Ahronoth newspaper as saying that she would call for elections.

“When I had to decide between continued extortion and bringing forward elections, I prefered elections,” the newspaper quoted her as saying.

Israel Radio suggested the elections could take place in February.

On Thursday, Livni gave potential coalition partners an ultimatum – three days to join a new government under her leadership or face the prospect of going to the polls – but that self-imposed deadline passed without success.

The Kadima party had the backing of the centre-left Labour party and was expected to keep the small Pensioners party in the government, but it needed to get the ultra-Orthodox Shas party on board to secure a majority in the 120-seat parliament.

Shas said on Friday it would not join Livni as she had refused to pledge that the future status of Jerusalem would not be on the agenda in negotiations with the Palestinians.

Sovereignty over Arab parts of Jerusalem, where around 270,000 Palestinians live, is a key Palestinian demand without which a peace deal would be impossible.

The renewal of Israeli-Palestinian peace talks at a US-hosted conference last November was supposed to have produced a final deal by the end of 2008, but there has yet been no agreement.

Saeb Erekat, a Palestinian negotiator, said on Saturday that a scheduled Monday meeting between Olmert and Mahmoud Abbas, the Palestinian president, had been postponed until further notice, but gave no reason for the delay.

Given the lack of movement towards a peace deal, Palestinian and Israeli analysts say that an Israeli election could ultimately have less impact than the upcoming US presidential vote – even if it were to put Benjamin Netanyahu, an opposition leader, into power at the head of a right-wing government.

Khalil Shaheen, a political analyst and senior editor at Al-Ayyam newspaper in Ramallah, said that movement towards an Israeli-Palestinian deal has slowed due to changes in the Israeli, US and Palestinian political landscapes.

“By early February, there will be three new governments – one each in Israel, the US and Palestine. This means that no-one can make any progress on the political process in the coming months,” he said.

Israeli politicians are however moving towards a regional framework to discuss peace with Arab governments, rather than just a focus on an accord with the Palestainians.

“This is something that the Israeli president [Peres] offered the Egyptian president Hosni Mubarak last week. Peres is trying to convince Ehud Barak, the head of the Labour party and Israel’s defence minister, and Livni of the [benefits] of a regional framework.

“If we take into consideration that Benjamin Netanyahu calls for entering into an Arab element into the peace negotiations with the Palestinians, we may find a shift towards negotiations between Israel and the Arabs, instead of holding negotiations seprately on the Palestinian track and on the Syrian track.”

Opinion polls have indicated that Netanyahu’s Likud party would sweep to power in a general election, but critics say that Netanyahu would stifle the peace process if elected.

“Netanyahu is definitely bad news for the peace process – that does not exist anyhow – and Livni is a person who was the chief negotiator and she didn’t do anything,” Ghassan Khatib, a former minister in the Palestinian cabinet, said.

“The only other alternative is if the American administration will try to engage. This can make a difference, regardless of the [composition of] the Israeli government.” 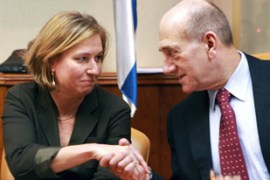 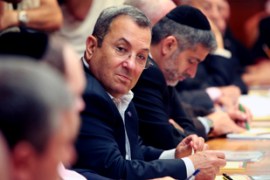 Kadima and Labour “close to agreement” that will make Tzipi Livni next prime minister. 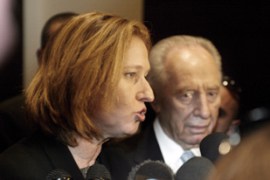