Alishah Ahmadzai, Kabul’s deputy police chief, said it was unclear what had provoked the shootings.

However, another senior official said – on condition of anonymity – that the shootings happened after an argument between the foreigners and their Afghan guards.

He also said it was still unclear if the killings were accidental or deliberate.

“The shootings come at a time of mounting tensions in the capital… [and after] the newly-appointed minister for the interior said he was uncomfortable with the presence of foreign, private security companies,” Ahelbarra said.

The Taliban has denied any involvement with the shootings.

Zamari Bashary, the Afghan interior ministry spokesman, said police had arrested 13 people after the incident, including DHL guards and employees.

Police at the scene covered the silver sports utility vehicle with plastic sheeting. There was blood on the ground and two bullet holes in the window of the DHL office.

The latest fatalities will further unnerve foreigners living in Kabul given the rise in the number of incidents taking place in the city.

The shootings come less than one week after a British woman aid worker was killed in another part of Kabul. 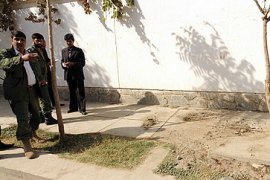 Assailants on motorbikes gun down woman who worked for the disabled. 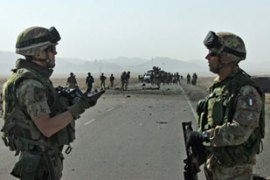 Military says misidentification led to attack that resulted in at least nine deaths.