The pro-independence DPP has accused the government of Ma Ying-jeou, Taiwan’s president, of failing to stand up to China over the melamine scare, which killed four babies on the mainland and made three children and one woman sick in Taiwan.

Taiwan’s relations with Beijing have improved dramatically since Ma came to power and he has promised to boost business and tourism links with China following eight years of strained relations under the DPP government.

Protesters are also opposed to a planned visit by Chen Yunlin, head of China’s quasi-official Association for Relations Across the Taiwan Strait.

Earlier in the week, Zhang Mingqing, Chen’s number two, was jostled and shoved to the ground by pro-independence activists during his visit to the island.

“We are rallying today to give the government a warning. We want it to defend Taiwan’s sovereignty and to improve the economy,” Tsai Ing-wen, the DPP chairwoman, said.

Chen Shui-bian, the former Taiwanese president who quit the DPP after money laundering claims against him and his family surfaced earlier this year, joined the march and was met by a cheering crowd.

More than 5,000 police were on duty at the scene, according to the National Police Agency, amid reported threats against Tsai and Chen.

Police this week arrested a man for allegedly threatening to harm the two. 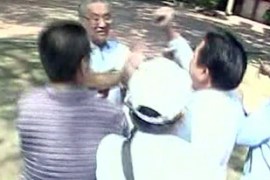