The death toll from floods sweeping through southwestern Yemen following heavy rains has risen to 49, officials have said.

The floods have been most severe in the provinces of Hadramaut and Mahara.

Officials said that four people were killed by lightning in the southern provinces of Tayez and Lahj, and a mother and son were also killed when lightning struck them in the al-Mahwit region north of the capital Sanaa.

Hadramaut and Mahara were both declared disaster zones on Friday, officials said.

Rescue co-ordinators said that among the victims were seven people who perished in al-Mukalla, the capital of Hadramaut which is located on the shores of the Arabian Sea.

Among the affected areas is the Unesco world heritage site of Shibam, where the area’s historic mudbrick buildings are threatened with collapse.

Shibam, which was totally isolated by the flood waters, is home to more than 20,000 people and is famous for its mudbrick high-rises that have given the town the nickname of “the Manhattan of the desert”.

On Friday, Ali Abdullah Saleh, the president, visited Hadramaut’s capital of Mokalla to oversee rescue operations after tasking a government commission with handling the effort.

Local authorities said that more than 500 houses had been destroyed across Hadramaut, where at least 3,500 people were made homeless.

A cargo vessel also ran aground off the port of Nashtun in Mahra, but all 17 crew members were rescued, an official said.

Five army helicopters were flown to the area to try to rescue thousands of people stranded by the floods, the official said.

Helicopters belonging to oil firms operating in the area were also enlisted to help, but gusty winds hampered rescue efforts.

Mohammed al-Qadhi, a journalist with the Yemen Times, told Al Jazeera that help for the flood victims was expected from other countries.

“According to the government, the United Arab Emirates called President Salah and offered some help and he ordered some foodstuff and other [items] to be taken to the affected area,” he said.

“We are expecting some other countries, like Saudi Arabia, to help … and some donations have started here in Yemen – from local shura councils and some business men have also made donations to help people.”

The Organisation of the Islamic Conference (OIC) said that the situation was a “national catastrophe” and launched an appeal for funds to help the victims.

Ihsanoglu called for “OIC solidarity with the people of Yemen in these difficult circumstances” and also urged the international community to provide assistance to Yemen.

The storm formed in the Indian Ocean this week, first headed to the Horn of Africa and the Gulf of Aden, then turned, weakened into a tropical depression and moved towards southern coast.

At least 25 people were killed in Yemen in April 2006 in floods and lightning brought on by torrential rains in eight provinces of the impoverished Arabian Peninsula country. 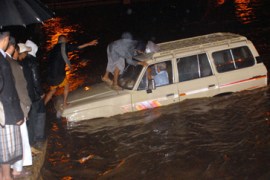 Hundreds are displaced as floods cause widespread devastation.