Benita Ferrero-Waldner, EU external relations commissioner, said: “This is most important, not only because we want to support physically and directly the Georgians, but also because it is a political symbol of solidarity with the Georgian people.”

The US had already offered at least $1bn to help Georgia rebuild after Russian troops and tanks crushed the country’s armed forces and damaged infrastructure.

Yasutoshi Nishimura, Japan’s deputy foreign minister, said Japan had pledged $200m in aid to Georgia, at the talks on Wednesday.

Russia sent in troops after Georgia tried to retake a breakaway pro-Russian region from separatists. Moscow has since withdrawn soldiers from Georgia proper, but the West accused Moscow of a disproportionate use of force.

Speaking to Al Jazeera, Javier Solana, the EU foreign policy chief, said: “The relationship between Georgia and Russia is not going through the best moment in history, but I think we have to continue helping the people in Georgia.

“I would like to help the people all over the region. We are going to have a summit with President [Dmitry] Medvedev on 14 November and, of course, we have to repair the damage that was caused in August.”

So far, little has been said about funding for reconstruction in South Ossetia, which was at the heart of the conflict.

Dmitri Babich, an analyst from Russian Profile magazine, told Al Jazeera: “The only nation that has so far pledged to help South Ossetia is Russia.

“The amount of money is very high, even by Russian standards,” Babich said, adding that it was about $20-30m.

“Although South Ossetia has only 10-20,000 people, and Russia has 1,000 times more people, Russia is the only country helping South Ossetia.”

Wednesday’s ministerial-level meeting will be co-chaired by the European Commission and the World Bank.

More than 70 countries were invited as well as international financial institutions.

Referring to the tens of thousands displaced by the conflict, Lado Gurgenidze, Georgia’s prime minister, said: “We clearly have issues related to the recovery of the direct civilian damage.

“We need to resettle them, give them livelihoods, rehabilitate the damaged areas – this costs a lot of money, the kind of money we, on our own, cannot afford.”

Resource-rich Georgia, a key energy transit route, depends on foreign capital for growth and has enjoyed an investment boom since Mikheil Saakashvili’s 2003 election as president.

The central bank in Tbilisi said last month that international institutions had pledged a loan package of about $1bn to help soften the impact of the conflict on the banking sector, which has had to scale down expectations of foreign investment. 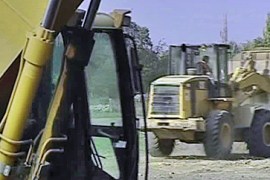 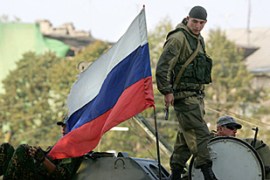 Military says it will build permanent camps in South Ossetia and Abkhazia.