Analysts have warned that world markets are likely to see a fair degree of volatility in forthcoming weeks as shares begin to recover from this month’s huge falls.

But investor anxiety appears to have lessened considerably compared to the last two weeks, when fears about tightening world credit and the health of the economy battered stocks across the globe.

Nicolas Sarkozy, France’s president, said on Tuesday that the EU should establish a sovereign wealth fund to buy stakes in firms struggling amid the current financial crisis.

Speaking at the European parliament, Sarkozy said that European sovereign funds could access cheap financing available to governments and make a profit selling back shares at a later date.

Earlier on Tuesday, Asian stocks had risen on the back of government efforts to bring down short-term lending rates and support by Ben Bernanke, the US central bank chairman, for more measures to aid the troubled US economy.

Japanese share prices closed up 3.34 per cent, as Japanese officials signalled the government might broaden its own bank bailout plan.

“When considering the need to facilitate lending to small firms, I can’t see any reason why big banks should be discriminated against,” Yosano said.

The assistance aims to ease restricted credit availability that has precipitated a financial crisis in the US.

Meanwhile in Ukraine, Yulia Tymoshenko, the country’s prime minister, said that it the country is close to securing an International Monetary Fund (IMF) loan, although its parliament is yet to consider measures needed to implement the transaction.

Ukrainian officials said that the loan could be worth up to $14bn, for which the country may have to reduce social spending and balance the budget.

The Korean government said on Tuesday it was planning to guarantee $100bn worth of foreign currency debts owed by 18 banks.

Some of those banks will be posting their quarterly results in the next few weeks.

Germany’s BayernLB Bank will become the first bank to ask for financial assistance under the country’s $675bn rescue plan, an official said.

The bank is said to want $7.2bn in capital from the government.

Recent weeks have seen governments pump billions of dollars into troubled banks, while central banks have injected huge amounts of cash into money markets – where banks lend to each other – in an effort to ease the credit crunch.

Such moves appeared finally to be bearing fruit as the cost of one bank borrowing from another eased slightly.

David de Garis, an economist with NAB Capital, said: “There are tentative signs that the worldwide measures taken by various governments to shore up the banking sector are starting to work.” 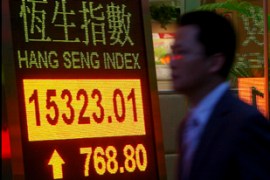