“This is a disappointing development for victims,” said Christian Hemedi, the co-ordinator of the Congolese National Coalition for the ICC, a group that support’s the court’s work.

“We were waiting for the proceedings to resume and restore our confidence in the court’s first trial,” he said.

The UN and other non-governmental groups had provided evidence to investigators on condition that not even judges would be allowed to see it.

But under the rules of the court, prosecutors are obliged to gather evidence that could clear suspects as well as evidence tying them to crimes and it would be possible that some of the secret evidence could have helped Lubanga.

Last week, prosecutors said that the UN had now agreed to give judges “unfettered access” to the documents, a move that could clear the way for Lubanga’s trial to start.

Lubanga, who was handed over to the court in 2006, has denied the charges in the case, which would be the first ever to come to trial before the ICC. 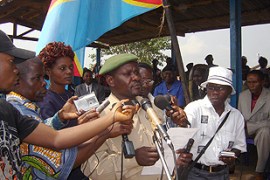