King Mswati had offered the use of a private jet to pick up Tsvangirai in Harare but he refused the offer.

“[Tsvangirai] told King Mswati not to send the plane. He’s not coming,” Roy Bennett, an official from the MDC, told the Reuters news agency.

“There is no way you can expect him to be in Swaziland when they are making it difficult for him.”

Tsvangirai has not been granted a normal passport for nearly a year, and is only allowed to leave the country on emergency travel documents valid for a single trip.

Tendai Biti, the MDC’s chief negotiator, called the document an “insult” but insisted his party would not pull out of the power-sharing accord.

George Charamba, a spokesman for Mugabe, said that Tsvangirai had been given an emergency travel document “because Zimbabwe is running out of paper for passports … because of sanctions”.

Tomaz Salomao, the Sadc executive secretary, said that security committee would now discuss the isssue in Zimbabwe’s capital Harare on October 27 to discuss the situation.

The power-sharing government is deadlocked over a disagreement on how ministries should be shared between the Zanu-PF party of Robert Mugabe, Zimbabwe’s president, the MDC of Tsvangirai and its splinter faction led by Arthur Mutambara.

The situation was a disappointment after Tsvangirai had on Sunday spoken positively of the chances of an agreement. 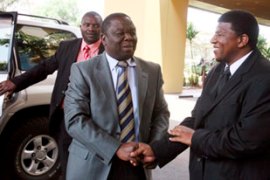 Tsvangirai hits out over deadlock

Zimbabwe’s PM-designate says failed talks with president were “dialogue of the deaf”. 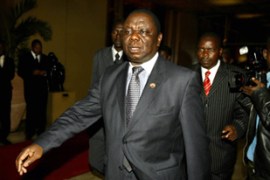 Long-time foes still hopeful of a breakthrough after several rounds of failed talks.

Power-sharing talks on point of collapse as mediator Thabo Mbeki flies into Zimbabwe.