“There are studies that show that the countries which are on Security Council with non-permanent seats benefit financially. Aid from the developed world tends to flow into these countries when they are in a position to help or hurt.

“One study showed that US aid increases by 59 per cent to countries when they serve on the Security Council.”

Japan, having already served nine terms on the council, was a favourite with analysts and easily won the Asian seat.

Despite sanctions imposed by the UN over its nuclear programme, Iran had challenged Japan for the seat.

Led by the US, many countries have expressed concern that Iran could produce a nuclear weapon.

Iran says its nuclear activity is for purely civilian purposes.

Among the European nations, Austria and Turkey won places on the Security Council, while Iceland’s bid was defeated.

Iceland had been considered a strong candidate, until the recent global financial crisis threatened its economy and crushed its banks.

In the end, Iceland won only 87 votes. 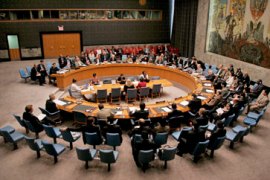 There has been debate over increasing the number of permanent Security Council members.