The so-called “al-Qaeda in the Arabian Peninsula” began a campaign to destabilise the Saudi government in 2003 with two suicide bomb attacks on foreign housing compounds in Riyadh. Around 264 people died in the violence.

Saudi Arabain security forces launched a massive operation, in co-operation with foreign experts, and the last major attack was a failed attempt to storm the world’s largest oil processing plant at Abqaiq in February 2006.

Hundreds of people have been detained over the last year with Saudi authorities saying that they were trying to revive a number of al-Qaeda inspired cells.

Human Rights Watch has expressed concerns that some of those detained were political dissidents rather than members of armed groups.

It said suggested that they could include men who fought in Afghanistan, Iraq and fighters extradited to Saudi Arabia recently from other countries.

The Arab News daily, citing Saudi interior ministry officials, said that the defendants were accused of either direct involvement in attacks or are thought to have helped by providing refuge, transport and funds.

Saudis are thought to form the largest contingent of foreign fighters carrying out attacks on US troops and the Iraqi government. 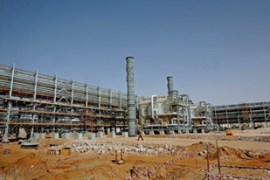