“But in addition to that, both these sources that we have, have said that there were a group of children playing beside the road, near where this bomb exploded. As a result five children were killed and another one child was very seriously wounded.

Nolan said that a Taliban spokesman had claimed responsibility for the suicide bombing, but denied that any children were casualties in the attack

“It’s an information war here as much as a military one,” he said.

Earlier on Monday, a female aid worker from Britain was shot dead in the Afghan capital Kabul by two men on motorbikes.

“Two armed men sitting on a motorbike shot her dead. The perpetrators have run away and the police are working to find them,” Zemarai Bashary, the Afghan interior ministry’s spokesman, said.

“Some bullets hit her body and some hit her leg and when police got there she was dead,” he said.

The woman worked for the SERVE Afghanistan non-government organisation helping the disabled.

Zabihullah Mujahid, a Taliban spokesman, claimed that the movement carried out the attack, saying: “We killed her because she was working for an organisation which was preaching Christianity.”

Mike Lyth, the London-based chairman of the organisation’s board, said. “We are a Christian organisation, we make no bones about that.

The shooting comes only two months after the death of three other aid workers and their driver in an ambush set by the Taliban; the bloodiest assault on foreign aid workers in Afghanistan for years.

There have been three assassinations in the southern city of Kandahar in the past week also carried out by men on motorbikes.

The Taliban claimed responsibility for two of the killings involving the city’s most senior policewoman and a government official.

The third was of a tribal elder shot dead with his son, a former bodyguard of Hamid Karzai, the Afghan president. They had left a mosque early in the morning.

Attacks on aid workers by fighters in Afghanistan were at the highest level in six years, according to a group advising non-governmental organisations on security.

There had been 146 security incidents involving non-government organisations before September this year, compared to 135 for the whole of 2007, the Afghanistan NGO Safety Office (Anso) said in a quarterly report.

They included 28 killings, including those of five international workers, and 72 abductions, the group said.

Meanwhile, Afghan and Nato-led forces have killed at least 34 Taliban fighters in two days of fighting in the southern Afghan province of Helmand, the provincial governor’s spokesman said.

Daud Ahmadi said that the fightign took place south of Lashkar Gah, the provincial capital, which was struck by several barrages of rocket and mortar fire last week. 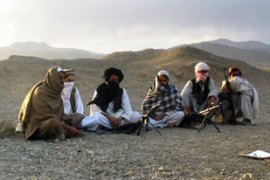