“The rule of radical market ideology that began with Margaret Thatcher and Ronald Reagan has ended with a loud bang,” he said.

“This new time that is dawning now must become our time, the time of social democracy.

“We are experiencing a time of decisions now, now it depends on us. In one year, I want to be working as chancellor so that we can steer our country in the right direction.”

Steinmeier called for a “protective shield for jobs in Germany” to follow efforts to prop up the financial sector, and urged companies not to shed skilled workers.

Recent polls suggest the Germans prefer Merkel to Steinmeier as chancellor, although the foreign minister is rated as one of the country’s most popular politicians.

The congress also saw the SPD choose Franz Muentefering, the former vice-chancellor, as its new chairman, replacing Kurt Beck who resigned in September.

Muentefering, like Steinmeier, is seen as being on the party’s right and is associated with former chancellor Gerhard Schroeder’s unpopular drive to reform the welfare state. 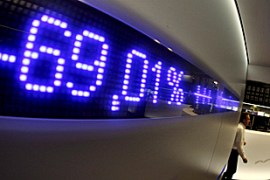