The measure is part of a co-ordinated European bailout effort in the face of nervous, volatile markets.

European and Asian stocks gained ground on Friday, with many investors picking up battered financial stocks, including many which will now benefit from the German bailout, as they sought bargains.

French stocks rose 4.68 per cent on the CAC 40 index after two days of heavy falls, mirroring Tokyo’s stock market which had bounced back earlier.

Earlier this week, Angela Merkel, the German chancellor, had warned that the danger for financial market instability had not been banished.

“We must, by approving this bill, as quickly as possible create the basis for calming the situation on the markets,” she said.

The German package foresees up to $540bn in lending guarantees for banks.

On top of that comes as much as $108bn to recapitalise banks and, if necessary, buy up risky assets, with another $27bn to back up the guarantees.

The sums are considered a maximum, and might not all be spent if the financial crisis eases.

Merkel has stressed that there will be “no payment without a trade-off”.

Banks seeking capital help will have to comply with government-set conditions that could include limits on managers’ pay and directions on lending policy.

Before the lower house vote, leaders of the opposition Greens and Left party said their members would cast their ballots against the package, while the pro-business Free Democrats said they would join Merkel’s governing coalition of Christian Democrats and Social Democrats in approving it.

Following the votes, Horst Koehler, Germany’s president, formally signed it into law, and Merkel’s cabinet has already arranged a special meeting for Monday to discuss implementing the plan.

The package comes a day after Germany, Europe’s biggest economy, lowered its GDP growth estimate for 2009 by a full percentage point to 0.2 per cent.

Speaking on the floor of the Frankfurt stock exchange on Friday, Robert Halver, the head of market research for Baader Wertpapierhandelsbank AG, remained sceptical.

He said most private banks in Germany will probably carefully consider taking on the government’s funds because it will mean more oversight.

“Every bank will consider three or four times before accepting this involvement,” he said. 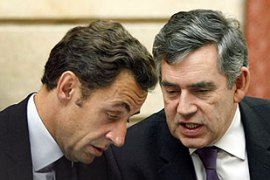 Summit in Brussels calls for increased and co-ordinated regulation of financial system. 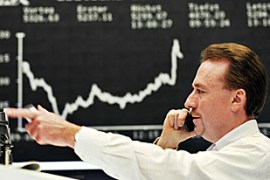