Mugabe said he believed an agreement can be reached but that compromise is needed “on all sides”.

“They [the MDC] maintain their position – as we do,” he told reporters on leaving the talks.

The AFP news agency reported an unnamed senior government official as saying that Tsvangirai’s MDC had insisted on control of the home affairs ministry, which oversees the police force.

“The proposal was that the MDC gets the ministry of finance and the home affairs ministry would be rotated [between the parties] over a period of time or years, but this was not acceptable to the MDC,” the official said.

Tsvangirai has threatened to pull out of a power-sharing agreement with Mugabe after the president last weekend announced he would award key ministries to his own party – securing his grip on the military, police and other security agencies.

Before the talks began, the MDC leader said his party needed oversight of at least some security agencies to reassure his supporters who suffered brutal violence during election campaigning earlier this year.

Under a power-sharing agreed deal a month ago, Mugabe remains president while Tsvangirai is to take up the new post of prime minister.

The former South African leader flew to Harare, Zimbabwe’s capital, this week in hopes of saving the deal, which was meant to rescue Zimbabwe from economic and political chaos.

Tsvangirai won a first round presidential vote in March, but pulled out of the following June run-off elections, saying that violence perpetrated by Mugabe’s Zanu-PF party had left more than 100 of his supporters dead.

The European Union has threatened to impose new sanctions on Zimbabwe if the deal falls apart. 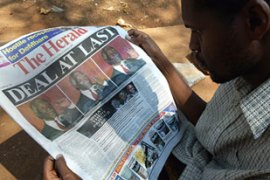 Zimbabwe political accord in peril

Opposition threatens to pull out of deal after ruling party grabs important ministries. 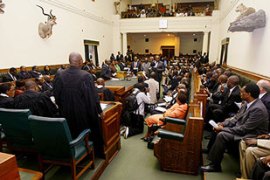