Weeks of economic turmoil and plunging stock markets have led to many voters saying they trust Obama’s leadership on the economy.

McCain launched his vision for US economic revival on Tuesday.

But many national opinion polls show Obama enjoying a strong lead over McCain, with a New York Times/CBS poll showing Obama on 53 per cent and McCain on 39.

Al Jazeera’s Rob Reynolds in Hempstead says McCain faces a dilemma, whether to go sharply negative against Obama, which has proved unsuccesful in the past, or to make a dramatic gesture – such as limiting his time in the White House to one term.

However previous such gestures, such as his decision to suspend his campaign over the bailout package, have not worked and the clock is ticking with a limited time left to turn the tide, he adds.

The Obama campaign is seeking to raise the stakes for McCain.

“It’s his last chance to somehow convince the American people that his erratic response to this economic crisis doesn’t disqualify him from being president,” Bill Burton, a spokesman for Obama, said.

McCain has indicated he is likely to bring up Obama’s relationship with former 1960s radical William Ayers.

The two served on a community board in Chicago together and Ayers hosted a political event for Obama early in his career.

Obama had noted McCain’s reluctance to discuss the issue with him directly during their last encounter.

“I was astonished to hear him say that he was surprised that I didn’t have the guts to do that,” McCain said in an interview with K-Mox radio in St Louis, Missouri.

“I think he’s probably assured that it’s going to come up this time.”

Several recent polls have shown McCain’s attacks on Obama’s character have largely backfired, increasing unfavourable opinions about McCain among voters looking for solutions on the economy.

“To make an impact in this debate, McCain needs to be proactive and be very specific about the way he would lead an economic recovery.”

Nicolle Wallace, an adviser to McCain, said on CBS’s Early Show the Arizona senator would focus on explaining how he would be the best leader to heal the financial chaos of the last month.

“We are in a major national crisis. And in an hour of crisis, John McCain is someone who has actually reached across the aisle, worked with Democrats to take on big, entrenched special interests, and has a record of reform,” she said.

The debate will be the last big event in the campaign before both candidates hit the trail for the two-and-a- half week drive to the elections on November 4. 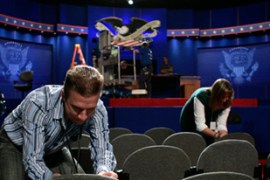 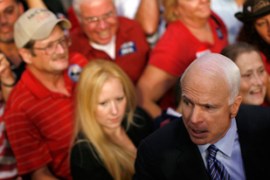