“No one is going close as they fear more missiles could be fired,” he said.

According to a local resident in Sam, two big explosions had shaken the village.

US-operated pilotless drones have stepped up strikes in Pakistan since the beginning of September, firing missiles at suspected fighters 11 times and killing dozens of people, Pakistani security officials have said. 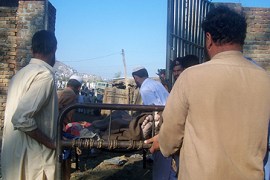