OSCE monitors noted efforts to create “more equitable conditions” for candidates, but said shortcomings were observed “during the crucial phase of vote counting and tabulation”.

Aliyev secured about 90 per cent of the vote on Wednesday, winning a second five-year term in office.

Ali Akhmedov, executive secretary of Aliyev’s New Azerbaijan Party, described the vote as a “victory of the Azeri people”.

But a number of opposition leaders had boycotted the polls, saying curbs on democracy and media freedom made participation pointless.

The state election commission said turnout was high, with 77 per cent of the population casting their vote.

But Isa Gambar, leader of the main opposition Musavat party, accused the authorities of trying to “force people to vote”.

Gambar also hit out at the election process, saying: “The authorities have no respect for the people, to the extent they didn’t even bother to imitate democratic elections.”

Opposition politicians have previously accused Western governments of toning down their criticism of Azeri democracy for fear of losing a strategic ally and access to its oil reserves in the Caspian Sea.

Oil and gas-rich Azerbaijan is regarded as a key state in terms of global energy supply and is being courted by both Russia and the West.

Aliyev is the son of Heydar Aliyev, the state’s previous president, who dominated political life in the country for more than 30 years. 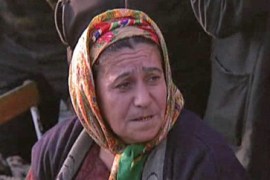 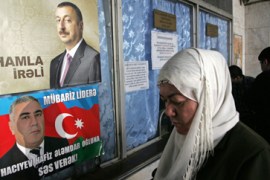 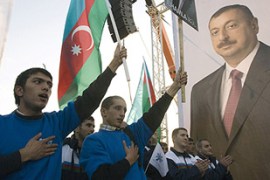