Some protesters were seen throwing flaming torches at police.

Police fired tear gas and broke up the crowd but several groups continued running through the capital, breaking windows and setting fire to containers.

At least 34 people, including 23 policemen, were injured and treated at Podgorica’s emergency medical centre, its manager, Vladimir Dobricanin, told the AFP news agency.

Police said they detained 28 people “for their involvement in the violent protests”.

The situation calmed down at around 9:15pm (19:15 GMT), but a major police presence remained in the city.

“New protests will be banned considering violent behaviour at the rally,” police said in a statement, referring to another opposition gathering scheduled for later this week.

Montenegro on Thursday recognised the unilaterally proclaimed independence of Kosovo despite strong opposition from its former federal partner Serbia and pro-Serb opposition parties in Podgorica.

Monday’s protest, called by four opposition parties in favour of closer ties with Serbia, set a deadline of 11am on Wednesday for the government to revoke its “illegal decision” and for parliament to call a referendum on whether Montenegro should recognise Kosovo’s independence.

There is a strong Serb community in Montenegro, with more than 30 per cent of the 650,000 population declaring themselves Serb.

Serbia lost control over Kosovo in 1999 after Nato bombed the country to stop the killing of civilians in a two-year war.

Montenegro separated from Serbia and proclaimed independence in 2006 after a majority of Montenegrins approved the move in a referendum.

Kosovo proclaimed independence in February and has so far been recognised by 50 nations, including the United States and most EU countries.

The latest to do so were Serbia’s neighbours bordering Kosovo, Montenegro and Macedonia, sparking an angry reaction from Belgrade, which told the ambassadors of the two former Yugoslav republics to leave Serbia. 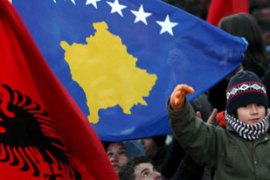