A correspondent for the AFP news agency said that police were manning checkpoints as well as patrolling churches and residential neighbourhoods across Mosul.

Dr Ali al-Dabbagh, the spokesperson for the Iraqi government, said on Monday that an investigation into the situation would be launched by a committee including members of the interior and defence ministries.

He said that anti-government groups were working with criminal gangs to target the Christian community.

The government will send additional Iraqi forces to the area to assure “the Christians of the government’s commitment to their security and protection,” al-Dabbagh said.

In the latest attack, which took place in the eastren part of the city late on Sunday, the armed men stormed into the businessman’s shop killing him and wounding his nephew.

At least 12 Christians have been killed since September 28.

The Christian community has been estimated at three per cent of Iraq’s 26 million people, or about 800,000 Christians, and has a significant presence in the northern Nineveh.

In recent weeks, hundreds of Christians have taken to the streets in Baghdad and Mosul to protest against a provincial election law which deprives them of small quotas of seats in Nineveh, Baghdad and other provinces.

The government has asked parliament to restore the quotas.

Meanwhile, the US military said it has detained six suspected anti-government fighters in the city.

“One of the wanted men is believed to be in contact with a foreign terrorist responsible for carrying out attacks against Iraqi and coalition forces,” the US military said in a statement.

At least seven people were killed and dozens wounded on Sunday in three separate attacks, including two suicide car bombings, aimed at US and Iraqi soldiers.

The violence in Mosul has occurred despite US-Iraqi operations launched over the summer aimed at routing al-Qaeda in Iraq and other fighters from remaining strongholds north of the capital. 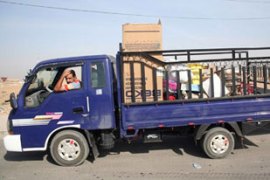