Piracy is rife in the busy shipping lanes near to Somalia’s coast and along the Gulf of Aden, where dozens of boats have been hijacked this year.

Millions of dollars have been paid to the pirate gangs operating in the area, which is vital to shipping between Europe, Asia and the Middle East, pushing up insurance costs and threatening humanitarian supplies.

Pirates were now targeting ships on the eastern side of Somalia after concentrating their attacks in the Gulf of Aden.

The Nato military alliance has agreed to join anti-piracy operations off the coast of Somalia amid growing calls for action against armed gangs which have attacked scores of vessels this year.

Seven vessels will be sent to the region, where negotiations are currently under way after one gang demanded an $8m ransom for a Ukrainian ship loaded with heavy weaponry.

The call came after European Union countries said they would launch an anti-piracy patrol, and Russia announced it would co-operate with the West in fighting the pirates.

Choong of the IMB said the Kuala Lumpur-based body had issued a fresh warning to ships to maintain strict anti-piracy watch since the waters off Somalia were too wide for Western forces to provide security.

“As long as there is no firm deterrent, pirates will continue to attack ships. But the military cannot be everywhere since this is a wide area,” he said.

According to the IMB, 69 ships have been attacked off Somalia since January; 27 were hijacked and 11 are still being held for ransom. Pirates are holding more than 200 crew members. 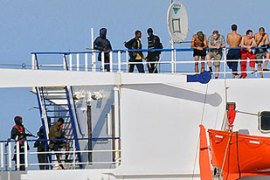