Garcia has yet to formally announce the appointment, but Simon would replace Jorge del Castillo, who was implicated in the scandal over oil concessions.

Though del Castillo denies any wrongdoing, his name was mentioned in taped conversations as someone who would provide favours in a plan to rig auctions of oil and gas concessions.

By replacing del Castillo with Simon, Garcia would appear to be placing a greater emphasis on social programmes and regain support with the left and in the provinces, where he is unpopular.

“I want to build a great alliance, friendship between sectors of the left and the government, and I have no doubt that businessmen of the so-called right will also draw near,” Simon told RPP radio.

Garcia is a former leftist whose first term as president in the 1980s ended in economic disaster. He has since become a champion of mainstream economic policies and was elected to lead Peru for a second time in 2006.

But his approval rating has fallen to 19 per cent, an all-time low for his current term, as critics say surging economic growth of 9 per cent a year has failed to lift millions out of poverty.

Before the wholesale cabinet resignation on Thursday, Juan Valdivia, the former mines and energy minister, had already been forced to quit, along with two other energy officials, as a result of the tapes.

Peru’s congress has also voted to investigate all oil and gas concessions granted since 2006.

It will scrutinise dozens of contracts signed between Peru and foreign oil companies for signs of irregularities in the country’s growing petroleum sector. 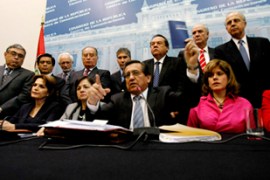