Later, the AFP news agency quoted him as saying: “We held a consultative meeting for more than three hours today and decided to blow up the ship and its cargo – us included – if the ship owners did not meet our ransom demand.”

The ship, which is carrying 33 tanks and other heavy weapons, is surrounded by US warships, and a Russian frigate is heading toward the scene, raising the stakes for a possible commando-style raid on the ship.

“Given the situation, we are on alert and preparing ourselves for any eventuality, including military against us,” Ali said.

Lieutenant Nate Christensen, a spokesman for the 5th Fleet, which is based in Bahrain and helps monitor the Somali coast, said the US Navy had no comment on the pirates’ threat to destroy the ship.

The pirates have been demanding $20m to release the Faina and its 21 crew, seized on September 25 while it sailed toward the Kenyan port city of Mombasa.

Sources close to the hijackers say the amount may have been reduced after several days of talks.

The exact details of the negotiations remain sketchy, but the pirates have insisted they must be paid before letting go the ship.

The hijacking of the Faina off the Horn of Africa has drawn the most international concern because of its dangerous cargo and momentum is gathering for co-ordinated international action against piracy.

Nato ministers agreed on Thursday that they would have seven ships in the area within two weeks, in addition to the US warship already on the scene.

On Tuesday, the UN’s Security Council unanimously approved a resolution urging states to deploy more air and naval forces to combat piracy off the coast of Somalia.

The Gulf of Aden is one of the world’s busiest maritime routes.

At least 63 ships have been attacked by pirates off the coast of Somalia since the start of the year alone and almost half of them were successfully boarded and held for ransom. 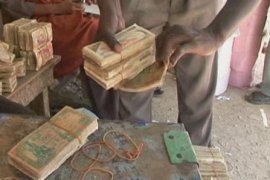 The country’s Puntland region is increasingly becoming a base for pirates.