“In the short term what the G7 needs to do is to try to take the actions it’s starting to take – co-ordinated central bank actions … to try to clean up the assets, to try to make sure there is liquidity in terms of banks being willing to provide funds to corporations and others [and] recapitalise the institutions,” he said on Thursday.

However he said the crisis could not be blamed on any particular corporation or the US government.

“I think the problem extends far beyond the Bush administration … it’s not my purpose nor to I really feel this is a blame game, you need to figure out the solutionm what happened in the past and move forward together,” he said.

“We’re not a criminial prosecuting institution, it’s my job to try to help poor people.”

Also on Thursday Dominique Strauss-Kahn, the head of the International Monetary Fund (IMF), urged action on the turmoil, but said unilateral action among by EU states “should be avoided, if not condemned”.

“There’s no domestic solution in a crisis like this one,” he said.

Both the IMF and World Bank are due to hold their annual meetings, while finance ministers from the world’s wealthiest nations – or G7 – will meet in Washington DC this weekend for talks on the crisis.

The G7, or Group of Seven, comprises Britain, Canada, France, Germany, Italy, Japan, and the US.

The markets had appeared to steady after South Korea, Hong Kong and Taiwan on Thursday followed the US Federal Reserve and central banks from Europe, Canada and China in cutting interest rates to contain the market meltdown.

But as the day wore on stocks began to slide again amid a piecemeal response to the situation by European governments.

Jose Manuel Barroso, the European commission president, said the 27 nation EU bloc was divided over the need to come up with a universal approach to the turbulence, that has wreaked havoc with world markets and brought the banking sector to its knees.

France, Belgium and Luxembourg have agreed to provide state guarantees for efforts by Dexia, the troubled Franco-Belgian bank, to borrow.

The three governments pledged to underwrite new borrowing for the world’s largest municipal lender just days after they and public bodies pumped 6.4 billion euros ($8.7bn) into the bank.

“This guarantee gives assurance to depositors that Dexia has sufficient liquidity to honour its commitments to its clients,” Yves Leterme, the Belgian prime minister, said.

The UK’s bailout plan – which amounts to about $875bn – was unveiled on Wednesday and involves the possible part-nationalisation of several of Britain’s main banks, a guarantee for inter-bank lending and the provision of short-term funds for banks.

Elsewhere in Europe, the Irish government extended its guarantee of bank deposits to cover those in Irish branches of five foreign-owned institutions.

Individual EU leaders continued to talk up their national banks, desperate to re-establish confidence in the dazed sector.

Silvio Berlusconi, the Italian prime minister, said only one Italian bank, UniCredit, had suffered problems, but that they had been overcome and urged investors to hold onto shares in Italian companies.

“Italian banks did not sign up to any ‘toxic products’ and had only this problem, which has now been resolved,” he said.

Banks stocks were hardest hit in Thursday’s trading with Barclays falling 13 per cent and Spain’s Santander losing 4.3 per cent, while oil shares dropped as crude oil fell more than two per cent.

In the US, the Dow Jones index dropped nearly 100 points as a disappointing trading update from General Motors reinforced fears about the state of the global economy. 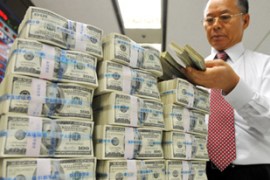 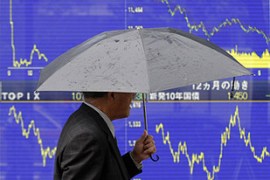 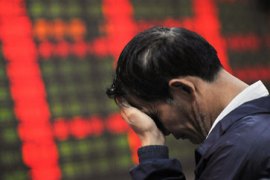