Wednesday’s performance threatens to be as negative as Tuesday’s 16.47 per cent drop, which took the index to a two-year low.

The CASE-30 has lost more than half its value in six months, after it almost doubled its value over the past four years.

Meanwhile, some shares in Dubai, part of the United Arab Emirates, have lost more than 25 per cent of their value since the trading week got under way on Sunday.

By mid-morning on Wednesday, the Dubai Financial Market lost 9.68 per cent over the previous day. It is the fourth day in a row in which the market has registered a loss.

Emaar, a real estate developer, suffered the greatest losses in trading, shedding 10 per cent of its share price.

The Kuwait Stock Exchange, the second largest in the Arab world, was down 2.8 per cent on the previous day, halfway through trading.

In a move reflecting the Kuwaiti government’s growing concern over the freefalling global economy, the country’s central bank cut its discount rate to 4.5 per cent, a reduction of 1.25 percentage points.

The Abu Dhabi Securities Exchange fell by 5.44 per cent while Oman’s Muscat Securities Market slumped by 6.33 per cent. 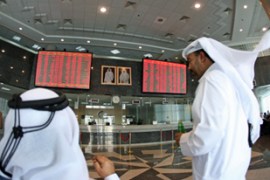 Markets down for third day due to uncertainty over global economic situation.