A suspected car bomb also killed one person outside the parliament amid reports of gunshots being fired. Witnesses said a protester had opened fire at the police.

Earlier thousands of protesters had tried to block Somchai Wongsawat, Thailand’s new prime minister, from delivering his first policy speech to members of parliament by blocking the roads with barbed wire and car tyres.

But early on Tuesday morning riot police moved in to clear the barricades, firing tear gas into the crowd.

At least 69 people were injured, including two men who had part of their legs blown off by exploding gas canisters.

Somchai eventually opened the parliamentary session after a 90 minute delay, despite continuing clashes outside the building.

His speech was boycotted by the opposition Democracy Party.

After the first clashes, protesters regrouped to barricade all four entrances to the parliament building, saying they wanted to block top officials from leaving.

Al Jazeera’s Selina Downes, reporting from outside the parliament building, said that several hundred riot police and protesters were locked in a tense stand-off by early Tuesday afternoon.

“This is some of the worst violence we have seen … the police don’t seem to have a handle on this situation. It is becoming incredibly dangerous and it is very difficult to see how this is all going to end without further violence,” Downes said.

She said some Thai MPs had come out of the building in an attempt to negotiate with the protesters, but their efforts had been rebuffed.

Several of the protesters said the clashes made them even more determined to fight on to remove Somchai’s government.

Some reports cited witnesses outside the parliament saying they heard gunfire when police moved to clear a path through the barricades, but police officials insisted that only tear gas was used and denied using “disproportionate force”.

“We did not use any weapon other than tear gas and shields to clear the path for parliamentarians to go into the building,” Deputy Major-General Umnuey Nimmanno, the Bangkok police chief, said.

“It is conventional practice in dispersing a crowd.”

Tuesday’s clashes follow months of mounting political tensions in Thailand which began in late May when demonstrators from the People’s Alliance for Democracy (PAD) – a coalition of businessmen, academics and activists – launched their campaign to overthrow Thailand’s elected government.

Their original aim had been to oust the then prime minister, Samak Sundaravej, whom they accused of being a puppet of Thaksin Shinawatra, Thailand’s former leader who was removed in a 2006 military coup.

They have since vowed to oppose Somchai as Samak’s replacement.

Following Tuesday’s clashes Colonel Sansern Kaewkamnerd, a spokesman for the Thai armed forces, said the military was “concerned” about the violence against unarmed protesters and said any serious injuries should be investigated.

He dismissed speculation of a military intervention to end the unrest in Thailand.

Thailand’s military have staged 18 coups since the country became a constitutional monarchy in 1932. 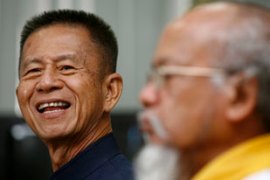 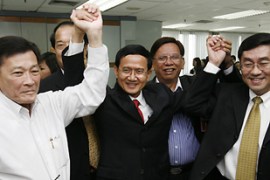