Akbar, who is a member of the Pakistan Muslim League (PML-N), the party of Nawaz Sharif, a former prime-minister, was reportedly injured in the attack.

Kamal Hyder, Al Jazeera’s correspondent in the capital Islamabad, said: “At the time of the attack, about 100 people had gathered at his native village because of the Eid holidays and also because politicians hold open meetings with people.

“We are told that this area has been the scene of sectarian violence. Only last week a suicide bomber had been arrested here.

“Parts of the Punjab have now become hubs of activity by certain organisation s which have been banned and the government has been hunting them down.

“So there is likely [there was] a sectarian element here.”

Raja Zafarul-Huq, chairman of the PML-N, told Al-Jazeera: “The incidents are increasing and the government is finding it difficult to control them, because they have not as yet evolved a national strategy where everybody is on board.

Zafarul-Hug said that a unified approach, whereby all parties come together to devise a strategy, was possible as innocent people were being caught up in the violence and the government seemed to be “totally helpless”.

Punjab is Pakistan’s most populous and prosperous province.

It has not been subject to the significant waves of violence that have hit other areas of the nation, for instance in the northern border regions with Afghanistan.

However, the Punjab is only 40 km away from the violence-prone North West Frontier Province, on the border with Afghanistan. 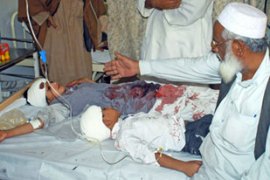 Attack on military wounds 13 people wounded, most of them soldiers.