He was brought to court in Kuala Lumpur on Monday in handcuffs, unshaven and wearing flipflops.

Supporters said he appeared frail as he was escorted into the hearing by police.

The charge stems from an article published on Malaysia Today in late April related to the killing of a 28-year-old Mongolian interpreter.

Two policemen have been accused of killing her and destroying her body with explosives in a jungle clearing.

A third man, Abdul Razak Baginda, a close associate of Malaysia’s deputy prime minister, is charged with abetting the murder.

The trial of the three men is on going.

Malaysian officials have already said Raja Petra will be detained for at least two years without trial under the ISA – a colonial-era law that allows for indefinite detention at the discretion of the country’s home minister.

He was arrested last month after allegedly publishing articles that the government said insulted Islam, inflamed racial tensions and tarnished the country’s leadership.

Critics have called for the ISA to be scrapped, saying a law that was introduced when communist fighters threatened national security is now being used to suppress legitimate political opposition.

Raja Petra’s detention comes amid escalating political tensions in Malaysia, with the government’s popularity at an all time low after suffering its worst ever result in March general elections.

The opposition, led by former deputy prime minister Anwar Ibrahim, has said it plans to oust the current leadership by orchestrating the defection of more than 30 government MPs. 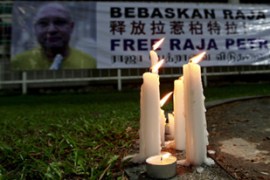