Two soldiers were killed in Thursday’s clashes, and another 20 were injured, Brigadier Udaya Nanayakkara, the military spokesman, said.

Tony Birtley, Al Jazeera’s correspondent in the Sri Lankan capital Colombo, said the country’s military is becoming increasingly confident that it will defeat the LTTE.

“The Sri Lankan generals are now talking about a military solution – about crushing the Tamil Tiger leadership. There is an awful lot of money and manpower going into the army offensive,” he said.

“In the last five years the Sri Lankan army has doubled to 170,000 men and they are spending $1.5 billion a year on the military machine. The Sri Lankan government has just given the go-ahead for an increase in spending in next year’s military budget.

“The military believe they are close now and that they will smash the Tamil Tiger leadership, so the political side of this has really gone out of the window.”

The military says the LTTE has lost 7,158 fighters since January, when Colombo pulled out of a Norwegian-brokered ceasefire.

The defence ministry has acknowledged the loss of 697 soldiers over the same period.

The LTTE did not comment on the ministry’s claims, but the Tamilnet website, which is sympathetic to the LTTE, said one civilian was injured in a bombardment on Thursday of Kilinochchi.

The surge in fighting comes amid the arrival of a UN convoy in the country’s north, carrying an estimated 800 tonnes of food for 200,000 civilians displaced by the conflict.

This is the first convoy of food supplies for civilians since the government ordered aid workers out of the region at the beginning of September.

The government said it was trying to avoid a repeat of the August 2006 killing of 17 local aid workers employed by the French aid agency Action Against Hunger.

The UN estimates as many as 230,000 people have been displaced around Kilinochchi and the LTTE stronghold of Mullaittivu, in Sri Lanka’s Vanni region.

“The fighting has become increasingly severe in the past three months – it affected our own operation in the area, which is why we withdrew,” Gordon Weiss, who is helping organise the UN relief efforts in Sri Lanka, told Al Jazeera recently.

He said the renewed aid convoys into the Vanni required the co-operation of both the government and the LTTE.

“It is not going to be sufficient in and of itself, but it is the first of a number of convoys. This is going to be a supply line.” 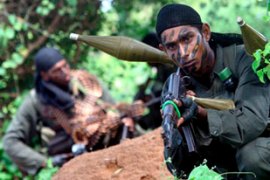