Documents bearing Fossett’s name, including a pilot’s licence, money and clothing, were found by Preston Morrow, on Monday.

The Federal Aviation Administration, which would have issued the discovered documents, said it was trying to confirm their authenticity.

After an extensive search failed to find any trace of the millionaire businessman or his plane he was legally declared dead by a court in Chicago in February.

The identification cards discovered by the hill-walker provided the first possible clue to Fossett’s whereabouts since he disappeared on September 3, 2007, after taking off from a Nevada ranch owned by Barron Hilton, a hotel magnate. 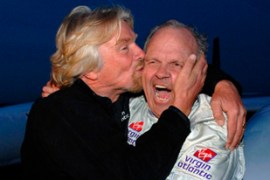 Adventurer Steve Fossett has landed in Kansas, becoming the first person to make a solo flight around the world without refuelling.