If the senate endorses the agreement it would finally end a three decades-long ban on nuclear trade with India imposed after it carried out its first nuclear test in 1974 and refused to sign the Nuclear Non-Proliferation Treaty (NPT).

The House of Representatives on Saturday passed the pact with a 298-117 vote.

Signed by George Bush, the US president, and Manmohan Singh, the Indian prime minister, in July 2005, the deal offers India access to Western technology and cheap atomic energy.

In return New Delhi must allow UN inspections of some of its nuclear facilities.

Critics fear the deal weakens any position taken on nuclear programmes in other countries, such as Iran.

“President Bush and his aides were so eager for a foreign policy success that they didn’t even try to get India to limit its weapons programme in return,” the New York Times said in an editorial on Tuesday.

“They got no promise from India to stop producing bomb-making material, no promise to to expand its arsenal, and no promise not to resume nuclear testing.”

Condoleezza Rice, the US secretary of state, said on Tuesday that the pact was likely to pass the senate vote.

“I certainly hope that it can get done, because it would be a landmark agreement for India and the United States,” Rice said. 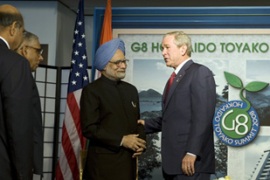 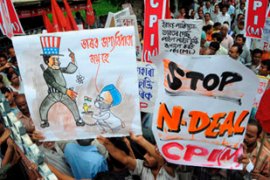 US to push India nuclear-ban waiver