The outcome was welcomed by the Russian Orthodox Church and descendants of Nicholas II, including Grand Duchess Maria Vladimirovna, who spearheaded the campaign to rehabilitate the imperial Romanov family.

Alexander Zakatov, Vladimirovna’s spokesman, said: “The grand duchess expressed her joy and satisfaction after the decision.”

Zakatov said the decision “proves the rule of law in Russia”.

Other Romanovs have been rehabilitated as victims of Soviet political repression, but a similar measure was refused in February for the last tsar and his immediate family, whose remains are buried in Saint Petersburg.

Georgy Ryabykh, a spokesman for the Orthodox Church, said the “decision can only be welcomed”.

“It strengthens the rule of law, restores historical continuity and 1,000 years of state tradition,” he said.

The fate of the tsar and his family has been a major source of political contention in Russia since the remains of most of the family were found in a forest near Yekaterinburg in the closing years of the Soviet Union in the early 1990s.

They were canonised by the Russian Orthodox Church as martyrs in 2000 despite abundant evidence that “bloody Nicholas,” as the  Bolsheviks branded him, had been a leading contributor to the misfortunes that befell the country.

In late 2002, the grand duchess appealed to a Kremlin commission under Vladimir Putin, the then president, to rehabilitate and declare null and void the “crimes” of the Romanovs.

Dmitry Medvedev, Putin’s successor and Russia’s youngest leader since Nicholas II, is said to be an admirer of the late tsar.

Many observers believe that the Russian authorities have played along with moves to rehabilitate the Romanovs because the  memory of their execution serves to tarnish the reputation of the Communist party, still the leading opposition group in Russian politics.

The anniversary of the tsar’s execution has become the occasion for religious processions throughout Russia.

This year, on July 17, hundreds of monarchists turned out in Moscow to commemorate the 90th anniversary of the murder of Nicholas II and his family. 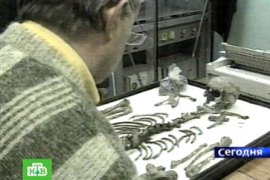 Archaeologists claim they have found the Romanov children.